Percocet, commonly prescribed to treat symptoms involving mild to moderate pain, belongs to a class of drugs known as opiates. Percocet first received FDA approval in 1976 as a medication treatment.

Percocet’s pain-relieving properties stem from its active ingredient, oxycodone, which is a Schedule II class narcotic, according to Washington College. As with any opiate narcotic drug, Percocet’s oxycodone ingredient makes for a highly addictive substance.

Opiates in general take effect within the brain’s chemical system, altering neurotransmitter secretions in drastic ways. Over time, Percocet’s effect on brain chemical processes places users at considerable risk of abuse as brain functions become dependent on the drug’s effects. Percocet addiction takes form as a person’s psychological functions come to depend on the drug’s effects.

People struggling with Percocet addiction will likely require professional help in order to overcome addiction’s all-encompassing effects. While not everyone who uses the drug falls prey to its addictive qualities, certain changes in behavior and overall lifestyle become noticeable indicators that it’s time to get professional help. 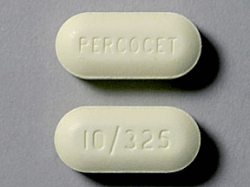 Percocet is a powerful opiate painkiller with a strong potential for addiction.

Like most every opiate-based drug, Percocet works by blocking incoming pain signals to the brain from pain-affected areas. In order to do this, Percocet must alter the brain chemical processes that regulate pain perception.

Along with oxycodone, Percocet contains acetaminophen, a secondary ingredient that works to enhance oxycodone’s effects, according to the U. S. Drug Enforcement Administration. Percocet addiction becomes an issue in cases where a person exceeds prescription guidelines or uses the drug on a recreational basis.

The physical make-up of opiate-based drugs allows for easy access to the brain’s chemical system. Opiates bear a close resemblance to certain neurotransmitter chemicals in the brain. Specific groups of brain cells secrete these opiate-like chemicals on an as-needed basis.

In effect, the brain accepts Percocet as one of its own materials because of the similarities that exist between Percocet and certain neurotransmitter chemicals. Over time, taking excess amounts of Percocet disrupts the brain’s chemical balance, which in turn throws other delicate chemical systems out of balance.

With each dose of Percocet, brain cell sites secrete unusually high levels of neurotransmitter chemicals. After a while, cell sites lose their sensitivity to Percocet’s effects. Someone experiencing pain symptoms or someone trying to get “high” will have to ingest a larger dosage amount in order to experience the same desired drug effect.

In the process, brain chemical functions become physically dependent on Percocet to the point where a person will start to experience withdrawal effects in the absence of the drug. Withdrawal effects may include –

Brain chemical alterations, increasing tolerance levels and withdrawal effects all work together in driving continued Percocet use. Once a person starts using Percocet as a means for self-medicating uncomfortable withdrawal effects, the addiction cycle is well under way.

Within any given year, an estimated two million Americans abuse opiate drugs, according to the Substance Abuse & Mental Health Services Administration. What starts out as a recreational pursuit can quickly turn into a daily routine as Percocet’s effects take hold.

Over time, the drug’s effects compromise a person’s ability to control or limit intake amounts in spite of any negative consequences that may result from ongoing use. Percocet addiction treatment provides addicts with the physical and psychological supports needed to overcome the drug’s hold over a person’s life.

Percocet addiction treatment starts with the detoxification stage with behavioral therapies administered throughout a person’s recovery process. For people with long histories of Percocet abuse, medication therapies may be administered to offset the severe chemical imbalances left behind by the drug’s effects.

Percocet detox treatment entails ridding the body of all traces of the drug, which is a necessary first step in the recovery process. According to Harvard Health Publications, detox treatment programs provide a medically supervised environment that’s designed to ease a person through the uncomfortable withdrawal effects that come when stopping Percocet use. Ultimately, the severity of a person’s addiction will determine how difficult this process will be.

While the withdrawal effects experienced during the course of an addiction can be uncomfortable, detoxing brings out the very worst of withdrawal symptoms, some of which include –

For many addicts, detoxification treatment offers the only way to make it through this difficult stage.

Outpatient programs work best for people at the early stages of addiction or those with work and/or family obligations. Nonetheless, the severity of a person’s addiction should always dictate the level or intensity of care he or she receives.

As Percocet exists as one of the more potent opiate-based drugs, its effects in the brain can be debilitating after years of ongoing abuse. For this reason, Percocet addiction treatment programs employ medication-assisted therapies to help counteract the damaging effects of long-term drug use, according to the National Institute on Drug Abuse.

By restoring normal brain chemical functions, these medications greatly reduce the level of withdrawal and cravings addicts experience in recovery.

When to Consider Getting Help

Percocet addictions can develop in people who take the drug for medicinal purposes as well as for those who abuse it. Regardless of the initial motivation or intent, Percocet’s addictive effects remain the same.

The drug’s ability to warp a person’s perceptions and thinking processes makes it all the more difficult for addicts to realize the need for treatment help. Signs of Percocet addiction show up in most every area of a person’s daily life. In effect, the more severe the addiction the more chaotic the addict’s life becomes.

Once the addiction cycle takes hold, users start to experience noticeable declines in their physical and psychological health. Eventually, a person’s entire lifestyle starts to revolve around drug-using behaviors.

Withdrawal symptoms often become the single greatest barrier to stopping or reducing Percocet use. While even those who take the drug for medicinal purposes can experience withdrawal symptoms, the types of withdrawal effects experienced with a full-blown addiction can prevent a person from functioning in everyday life.

People who reach the point where they can’t make it through the day without Percocet’s effects should probably consider getting needed treatment help. Failing to do so will only cause withdrawal symptoms to grow more intense with ongoing drug use.

The brain chemical imbalances brought on by Percocet abuse make it all but impossible for the brain to maintain normal bodily functions, according to the Semel Institute. Over time, these changes take a toll on the major systems throughout the body and bring about abnormal and uncomfortable effects. In the process, a person’s physical health undergoes considerable decline.

Health problems brought about by Percocet addiction include –

For people who start out taking Percocet for recreational purposes, the inability to control intake amounts becomes progressively worse the longer a person keeps abusing the drug. The brain and body’s physical dependency on Percocet effects coupled with the psychological dependency that takes hold once addicted can easily take over any attempts to manage or limit intake amounts.

Addiction, in any form, drives addicts to establish the type of lifestyle that provides for needed drug supplies and the time involved with using. Once a person reaches a point where his or her life revolves around getting and using Percocet, it’s time to consider getting needed treatment help.

Considering the extensive damage caused by ongoing Percocet use, the sooner a person breaks the cycle of abuse, dependency and addiction the better.