Hydrocodone, one of the many opiate-based drugs on the market, carries a fairly high risk of abuse and addiction when used for recreational purposes. Since hydrocodone products contain other ingredients that work to enhance hydrocodone’s effects, the potential for addiction increases all the more.

The use of Subutex as an hydrocodone addiction treatment therapy offers recovering addicts much needed relief from persistent withdrawal and cravings effects. While Subutex works in ways similar to methadone, the drug improves upon methadone’s effects in various ways.

For people considering getting treatment for hyrdocodone addiction, Subutex offers an effective solution to the biggest challenges addicts face in recovery.

A hydrocodone addiction may start out at as a necessary treatment for an injury or a temporary condition. While intended for short-term purposes only, the euphoric, calming “side effects” from taking the drug often prompt users to keep taking the drug on an indefinite basis.

According to the U. S. National Library of Medicine, hydrocodone works by interrupting pain signals between the cells that make up the brain and central nervous system. It does this by triggering endorphin secretions from key cell receptor sites, which, in turn, overrides any pain messages the brain receives.

Prolonged use of hydrocodone throws the brain’s normal chemical balance off as cell receptor sites weaken from overuse. Over time, these cell sites become dependent on the drug’s effects to secrete endorphin chemicals needed by the body. 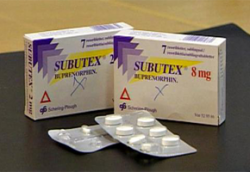 Subutex can be prescribed by most physicians.

After months or years of hydrocodone use, the brain loses its ability to regulate bodily processes without the effects of the drug. These conditions often persist for people who’ve entered the recovery process and maintained abstinence for a long while.

According to the U. S. Food & Drug Administration, Subutex, a brand name for buprenorphine, works to support weakened brain functions and restore the brain’s natural chemical balance. Subutex is a synthetically made opiate drug that’s formulated to trick the brain into thinking its receiving an addictive opiate drug.

In effect, Subutex enables brain cell receptor sites to function normally, so a person doesn’t experience the drug cravings and withdrawal effects that so often plague people in recovery. Subutex differs from addictive opiates in that it doesn’t produce any euphoric effects. The absence of euphoric effects cancels out any addictive potential the drug may have.

Subutex’s mechanism of action works in much the same way as methadone. Both Subutex and methadone work well at relieving uncomfortable withdrawal and cravings effects; however, methadone carries a higher potential for abuse and addiction than Subutex.

According to the State of New Jersey resource site, Subutex is preferable to methadone during the detox and inpatient stages of treatment. Subutex can also be used as a long-term treatment for hydrocodone addiction.