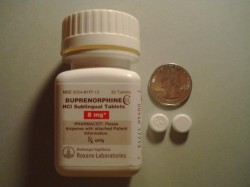 Buprenorphine is often used as a treatment for opiate addiction.

Opiate addictions have ravaged more than a few lives, leaving people helpless in the face of any intention or motivation to stop using. Hydrocodone, also an opiate drug, holds its own in terms of its ability to weaken brain functions and warp a person’s sense of will and purpose.

For recovering addicts, weakened brain functions make it all the more difficult to maintain abstinence on a long-term basis. Without some form of physical or medical support, the risk of relapse will continue to haunt a person’s recovery efforts.

Buprenorphine, one of the newer medication therapies on the market, picks up where the brain leaves off in terms of regulating essential brain and body functions. Buprenorphine comes in two different formulations that target different brain processes to produce various therapeutic effects. Ultimately, buprenorphine offers a long-term maintenance solution for people recovering from severe hydrocodone addictions.

Hydrocodone has become a commonly prescribed treatment for conditions involving moderate to severe pain. The widespread practice of prescribing hydrocodone has no doubt contributed to recent hydrocodone addiction trends.

According to the West Virginia Department of Health & Human Resources, prescriptions handed out for hydrocodone increased by 244 percent between 1997 and 2006. Not surprisingly, drug treatment admission rates for hydrocodone and other opiate-based medications have increased by 430 percent overall. Considering the damaging effects of hydrocodone on essential brain functions, the sooner addicts get needed treatment help the better.

According to the Substance Abuse & Mental Health Services Administration, buprenorphine’s effects also prevent withdrawal effects from developing by meeting the brain’s dependency needs for opiate-type substances. On average, one dose of buprenorphine relieves cravings and withdrawal effects for 24 hours. In effect, a person starts to feel normal again without the associated “high” that comes with opiate use.

Suboxone’s added naloxone ingredient produces a type of antidote effect that prevents a person from trying to get high by injecting Suboxone. So someone who injects Suboxone will experience uncomfortable withdrawal effects almost immediately. Naloxone doesn’t produce this type of effect when the drug is taken as prescribed.

Both the Subetex and Suboxone versions of buprenorphine come with certain built-in safety precautions that help to reduce the risk of overdose as well as the potential for relapse. Buprenorphine’s function as a partial agonist creates a “ceiling effect” that limits the drug’s mechanism of action at unusually high dosage levels. This function greatly reduces the likelihood a person will overdose on too high a dosage amount.

As far as relapse potential goes, buprenorphine’s ability to curb cravings and withdrawal effects coupled with the added naloxone ingredient can go a long way towards counteracting the damaging effects from chronic, long-term hydrocodone use.