Cocaine abuse will absolutely affect your health, especially if your abuse of the drug is chronic.

Why is Cocaine Bad for Your Health?

Any type of drug, whether medical or nonmedical, has side effects that will affect your body. For some, it is only constipation or other easily dealt with issues. For cocaine, the health effects are many and only get worse the longer you take the drug. And as those who abuse the drug are not getting any medical benefit from it, the health effects can be very problematic and dangerous.

Cocaine gives a person a momentary high, but it takes far more than it gives you. According to the DOJ, “The widespread abuse of highly pure street cocaine has led to many severe adverse health consequences.” Those who take the drug often do not realize how addictive it is and they continue to take more of it as they become more hooked. Over time, cocaine can begin to affect the entire body, causing health risks that the user may have never even considered.

According to the NIDA, cocaine “constricts blood vessels, dilates pupils, and increase body temperature, heart rate, and blood pressure.” Every time a person abuses cocaine, these effects occur. They are not good for the body, and the longer they go on, the more dangerous they become. 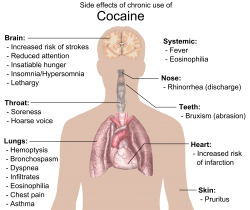 Cocaine causes a lot of damage on both the short and long-term.

Other health effects of cocaine abuse in the short term are:

The stress that is put on the heart and circulatory system during cocaine use can lead to very dangerous consequences, even in the short term. The NIDA states that “cocaine-related deaths are often a result of the heart stopping (cardiac arrest) followed by an arrest of breathing.” This can occur when someone overdoses on cocaine, a common health risk for cocaine users.

Many people feel that their mental healths are compromised by the abuse of cocaine over time. Cocaine abuse in the long term can cause someone to experience hallucinations (coke bugs), paranoia, and psychosis. It can also cause a person’s brain activity to function at a “much lower [level] than… in the normal brain” (NIH). This is important because a person’s mental health affects their entire recovery, let alone life after drug abuse.

Other long term health effects of cocaine abuse include:

A person can experience stroke, cardiac arrest, and respiratory failure after abusing cocaine in the long term as well. Heart disease and problems with the heart are also serious health issues for cocaine abusers, including “cardiac arrhythmias [and] ischemic heart conditions” (DOJ). While someone who abuses cocaine is always under the threat of these health risks, the longer they use it, the harder it is to stop.

Cocaine abuse has many effects on a person’s health. While the high of the drug may be pleasurable, every time you use cocaine you are affecting your body and mind in a negative way.