Withdrawal Symptoms of Alcohol: What You Need to Know

If you have been a heavy and frequent alcohol drinker for a number of years, you may be an alcoholic. According to the NLM, alcoholics often exhibit four main symptoms: cravings, loss of control, tolerance, and physical dependence, the latter of which leads to withdrawal when their alcohol use is suddenly stopped.

Before you decide to stop drinking, especially if you believe you will undergo the symptoms of alcohol withdrawal, it is important to know how to handle the syndrome itself, where best to seek treatment, and what to expect.

The symptoms of alcohol withdrawal can be quite unpredictable and difficult to gage in an individual who has never gone through them before. As stated by the NLM, “Alcohol withdrawal symptoms usually occur within 8 hours after the last drink, but can occur days later.” If you believe that you could have the potential to experience alcohol withdrawal symptoms, it is better to seek treatment early instead of waiting for them to occur. “Symptoms usually peak by 24 – 72 hours, but may persist for weeks.” Therefore, it is important to be prepared for the syndrome’s possible intensity. 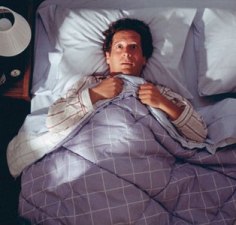 Alcohol withdrawal can cause insomnia and anxiety.

Common symptoms of alcohol withdrawal may start as few as six hours after the individual stops drinking and be rather mild at first. These include:

Many individuals also experience shakiness or even tremors in the hands and other parts of the body. This is a sign that alcohol withdrawal may become more severe. Depression is also a common symptom for which an individual must be treated or it could become much worse.

Dilated pupils, pallor, and sweating are several other symptoms that many individuals begin to exhibit. It can be difficult to hide the effects of alcohol withdrawal because so many of them are obvious to others. Still, these symptoms can level out after a few weeks or so, especially with the appropriate treatments. However, there is sometimes a chance that the individual will experience a severe form of alcohol withdrawal called delirium tremens.

According to the Better Health Channel, this syndrome “occur[s] in about 5% of people admitted to hospital for alcohol problems.” It can be treated safely, but without treatment, it can be dangerous and even life-threatening. Delirium tremens often occurs in those who have been drinking heavily for a period of ten years or longer.

The symptoms, as stated by the NLM, “may get worse quickly, and can include:”

The other symptoms caused by alcohol withdrawal are often present as well during delirium tremens. The syndrome is considered to be dangerous because of its ability to cause hallucinations in patients, delirium, stupor, and even seizures. While the last of these symptoms can occur on its own (usually around 12 hours after the individual’s last drink) and without the other side effects of delirium tremens, seizures can be very harmful as well and should be treated in a hospital or medical detox center.

Predicting the Severity of Withdrawal

Unfortunately, there really is no way to predict how severe an individual’s withdrawal syndrome will become after they stop drinking. Some who have been through the condition before might have an inkling, but there is still no way to know that the deadlier symptoms will or will not occur. Therefore, it is important to always seek out “prompt medical treatment for the symptoms of alcohol withdrawal” in order to preempt possible symptoms of delirium tremens (NLM 3).

There are a number of recovery centers listed in our directory where you can receive treatment for alcohol withdrawal symptoms. However, if you are in an emergency situation, you must call 911 immediately and be taken to a hospital.

In any type of treatment situation, individuals will usually be given medication as well as receive therapy in order to help facilitate the transition into addiction treatment. Depending on the severity of your condition, you may choose between two types of treatment.

Both types of facilities will often offer counseling for the individual (and their families as well) in order to help discuss the need for full addiction treatment. Like with drug addiction, a person has a better chance of recovering from alcoholism and avoiding relapse if they attend a rehab program after withdrawal is complete.

With treatment, most individuals survive alcohol withdrawal and are able to attend rehab. However, when someone attempts to go through the syndrome alone, it can be extremely dangerous and unpredictable. Some individuals have previous health conditions associated with their alcohol abuse, often liver or heart related, and in many cases, ending their abuse of the substance and attending treatment can help to improve these conditions.

Many individuals continue into a support group like Alcoholics Anonymous even after withdrawal and treatment are over. It is important to do whatever is best for you to ensure that you no longer abuse alcohol and avoid experiencing the syndrome again.