Signs of Alcoholism You Can’t Miss

Drinking alcohol is a common event during social meetings, parties and similar situations—but when alcohol use goes from social fun to a desired need, alcoholism may be to blame. The U.S. Department of Health and Human Services notes that more than 109 million people abuse alcohol every month in the United States—it is the most used intoxicating substance in the U.S. 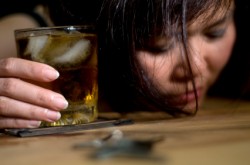 Being unable to control your alcohol intake is a sign of addiction.

Because people are likely drinking all around you, it’s important to recognize the signs of alcoholism so that you don’t let a potential problem slip through the cracks. According to the Perelman School of Medicine, millions of people suffer from alcoholism and cannot safely have a single drink without the potential for devastating, self-destructive, consequences. Don’t miss the following signs of alcoholism in someone you care about:

According NYU Langone Medical Center, “needing greater amounts of alcohol to feel the same effect,” is one of the more common signs of alcoholism. As a user drinks alcohol regularly, the risk for increased tolerance develops and the need for more alcohol in order to produce the same effects grows.

Symptoms of withdrawal are common in people who have become addicted to any substance. When alcoholism is to blame, the user may feel the following symptoms when alcohol is not used:

People who suffer from alcoholism cannot say “no” to a drink. They may drink more than they intend to and seem to always “overdo it.” The alcoholism makes it seem impossible to quit drinking as long as there is alcohol around and when the drinking stops, the withdrawal symptoms lead to alcohol-seeking behavior in an effort to curb the withdrawal.

Alcoholism will leave you preoccupied with drinking. You think about it all the time, you are always considering what you can and cannot do while drinking and it controls your life. You will give up hobbies and time with friends and family to drink. You may even drink at work or school.